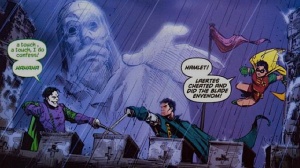 Now that The Avengers is a smash hit, spare a thought for the other superheroes – that second tier of hard-working women and men in tight-fit halloween costumes who didn’t quite make the cut.  I’m thinking in particular of one young lad in a skimpy sleep mask, with a modest letter R on his tunic, who was given the corniest lines of any crime fighting star on 60s TV (“Catwoman, you are not a nice person!” anyone?).  And still we loved him.  Adam West, this monchielle is for you.

I didn’t want to be
a sidekick on this show.
I can’t imagine who
would take this role unless
their agent told them to.

I didn’t want to be
remembered for the way
I looked in yellow tights
with cartoon words like “zonk!”
appearing during fights.

I didn’t want to be
stuck riding shotgun with
a guy dressed like a bat,
smacking my gloved fist to
say “Holy this-or-that!”

I didn’t want to be
Boy Wonder, I thought I’d
play Hamlet. But now when
this TV gig is up,
I’ll never act again…

For friends over at the dVerse Poets Pub.

When the well has run dry

When the well has run dry
it comes without warning.
The tongue swells in your cheek,
thick and livid, so that
your words no longer speak.

When the well has run dry,
you curse Providence for
this damming of the source
of such early growth. You
rail. Yet it is, of course,

when the well has run dry
that the real work begins.
This is the place you give
yourself to the long task
of learning how to live

when the well has run dry,
the daily love affair
with hardy words you kiss
into unlikely soil
to bloom up from the dust.

Maybe we all exist

Maybe we all exist
only to inflict pain
on the ones that we care
the most about, without
even being aware;

maybe we all exist
only to light the sky
and fill each other’s dreams.
Neither one seems true. From
these desert years, it seems

“maybe.” We all exist
firstly to be ourselves;
willing to stand alone
and trust our heart’s desire
to plumb their own unknown.

What no one can understand

We must not keep doing
this. The words spill slowly,
with my hand in your hair,
in some lost restaurant
sixty miles from nowhere.

We must not keep doing
such damage to ourselves,
and those we love. The lift
our souls gained at the start
has turned into a gift

we must not keep. Doing
anything together
now holds our life in thrall
to fear, muscles clenched for
the axe we know will fall.

We must not keep doing
this, dear friend. For freedom’s
found not in what we choose,
but rather in the good
we at the last refuse.

A monchielle, written for a friend in a long-distant cafe.
To share with friends at the dVerse Poet’s Pub.

Whenever I see her
picture, or hear a friend
describe what she
is up to now, I can
still feel her holding me.

Whenever I see her
name in print, or I smell
the sweet perfume she wore
for me that spring, the lust
I felt still shakes my core.

Whenever I see her
in a dream I know that
my heart’s still open to
her summons, and she can
crawl inside me where- or

whenever. I see her
breath on my window, I
taste her salt. I left, yet
still after twenty years
these dry bones won’t forget.

You took a risk

You took a risk last night
Standing up there alone
Where you slowly allowed
Your pure voice to strip bare
Defenseless to the crowd.

You took a risk last night
Wearing that shining dress
That caught each colored glint.
You could not help but shine
In that dim firmament.

You took a risk last night
Turning your face to us
As your soul fell apart.
You became translucent
Singing your broken heart.

You took a risk last night
And we loved you the more
For letting us hold you
Even for a moment
As a lover would do.