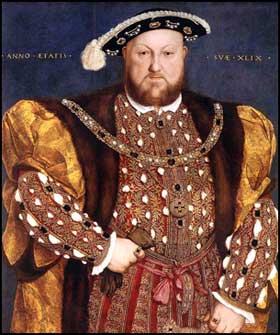 Despite recent hoopla about the birth of a baby, I’m not convinced it ever makes sense to marry into the Royal Family. Witness this brief history of the marriages of King Henry VIII.   Written for Poetic Asides, in senryu form.

I. Catherine of Aragon
Queen of earthly Queens
ditched after twenty-three years
for someone younger.

II. Anne Boleyn
In less than three years
he had her executed
on trumped-up charges.

IV. Anne of Cleves
Married for six months.
Never even slept with him.
She got off lightly.

V. Catherine Howard
An adulteress?
Like her cousin Anne Boleyn
she soon lost her head.

I'm a poet and musician,transplanted from London, England to beautiful northern Indiana. By day I am a stay-at-home dad with our three kids while my amazingly talented spouse conquers medical school one long shift at a time. At night, I'm a performer and trouble-maker. I love my life.
View all posts by Andrew Kreider »
← Year 24: Nothing says I love you like a banjo
July 29, 1981 →