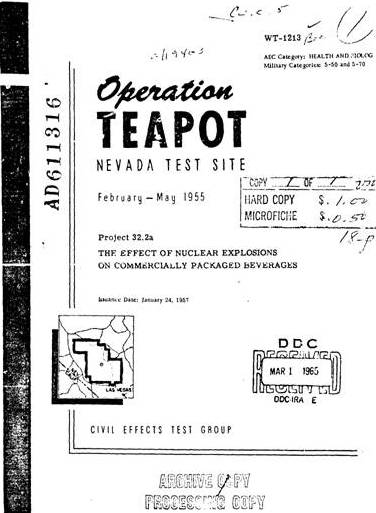 The 1950s were an amazing time – full of hope, fear, and bizarre scientific experiments. Here’s a true story, from a recently released government document. Sometimes you can’t make this stuff up.

In 1955, eight communist countries signed the Warsaw Pact
war was beginning between south and north in Vietnam
and trouble was simmering on the Montgomery buses.

Meanwhile, in the Nevada Desert, government scientists
were conducting an experiment on the possible effects
of a nuclear explosion on beer and soft drinks.

Their results, duly published with full extract and pages of data,
proved that in the event of a nuclear catastrophe, packaged beverages
would be a suitable emergency source of liquid refreshment,

though the beer might lose a bit of its flavor.

I'm a poet and musician,transplanted from London, England to beautiful northern Indiana. By day I am a stay-at-home dad with our three kids while my amazingly talented spouse conquers medical school one long shift at a time. At night, I'm a performer and trouble-maker. I love my life.
View all posts by Andrew Kreider »
← Success
Breaking →